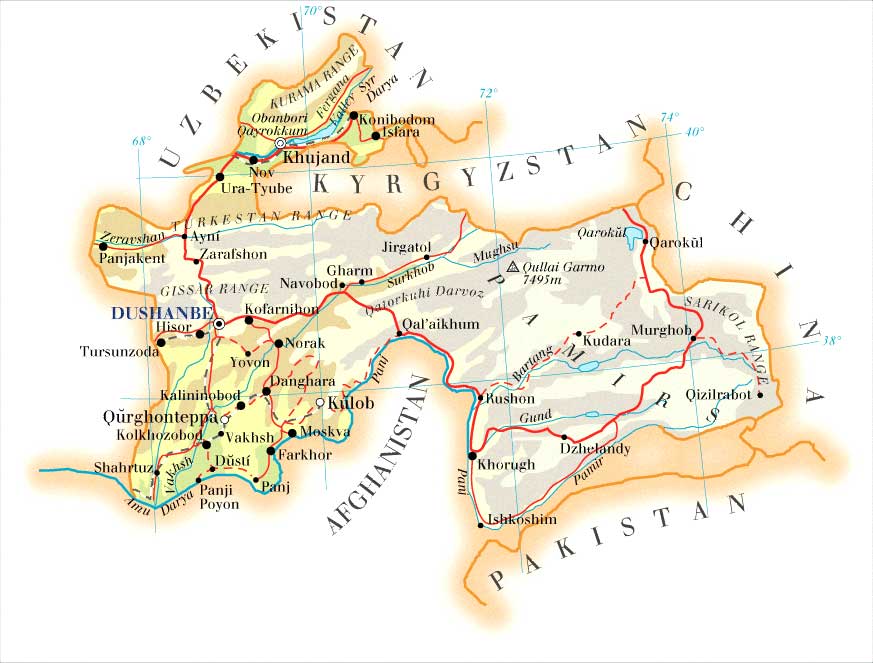 TAJIKISTAN
Tajikistan is a unique tourist attraction of modernity, as it has a great cultural and historical heritage, unique culture, and favorable geographical location, variety of natural landscapes, recreational areas, flora and fauna. 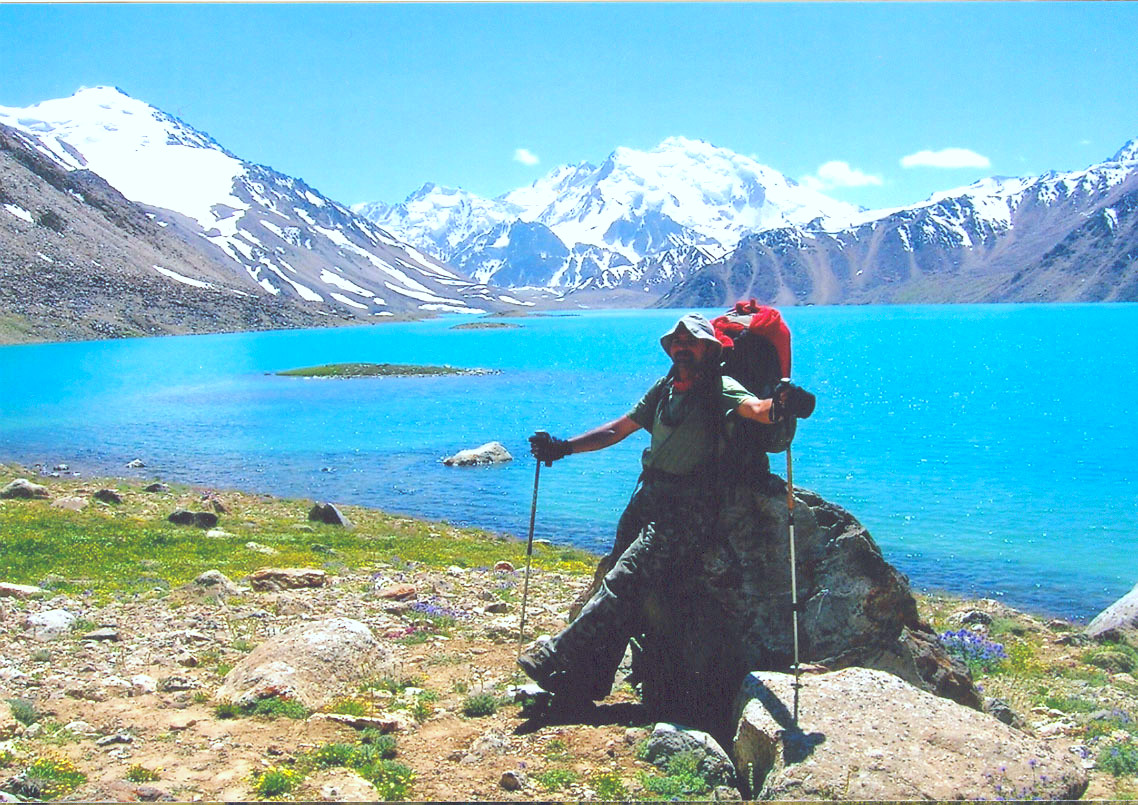 Tajikistan is a mountainous country with altitudes ranging from 300 to 7495 meters above sea level. 93% of the country is mountain ranges relating to the Pamir, Hissar-Alai and Tien Shan mountain systems. These ridges are separated by rich and fertile lands of Ferghana, Zarafshan, Vakhsh and Hissar valleys. The complexity of the terrain and the large amplitude of mountain heights cause an exceptional variety of flora and fauna. 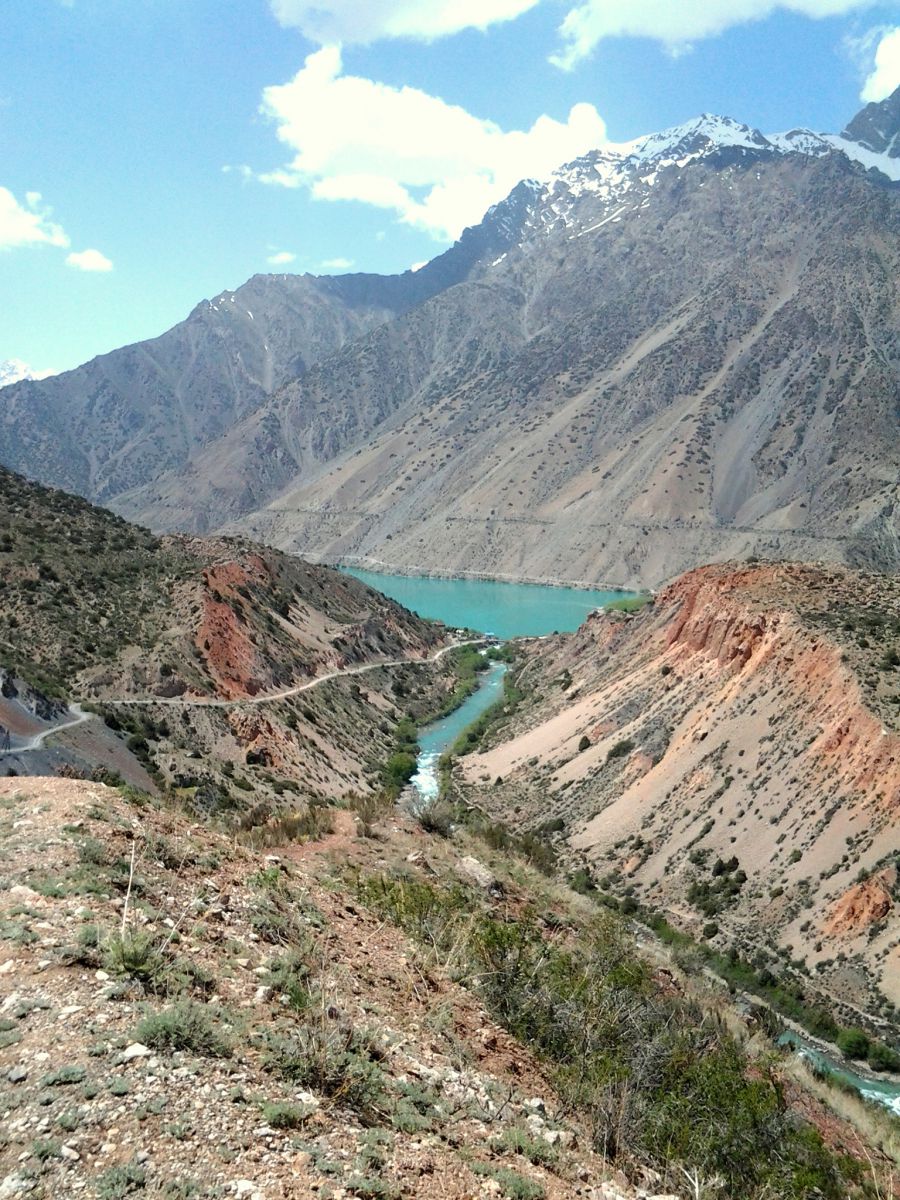 Tajikistan is the land of the highest peaks, strong glaciers, and swift rapid rivers, lakes, breathtaking in their beauty, unique flora and rare animals. It is mountainous, floor landscape that determines originality and uniqueness of the nature of Tajikistan, the richness of its forms brought to life by a variety of climatic zones. From the sweltering heat of Vakhsh valley one can get to the arctic cold of eternal snows of the Pamir for one hour and a half flight. 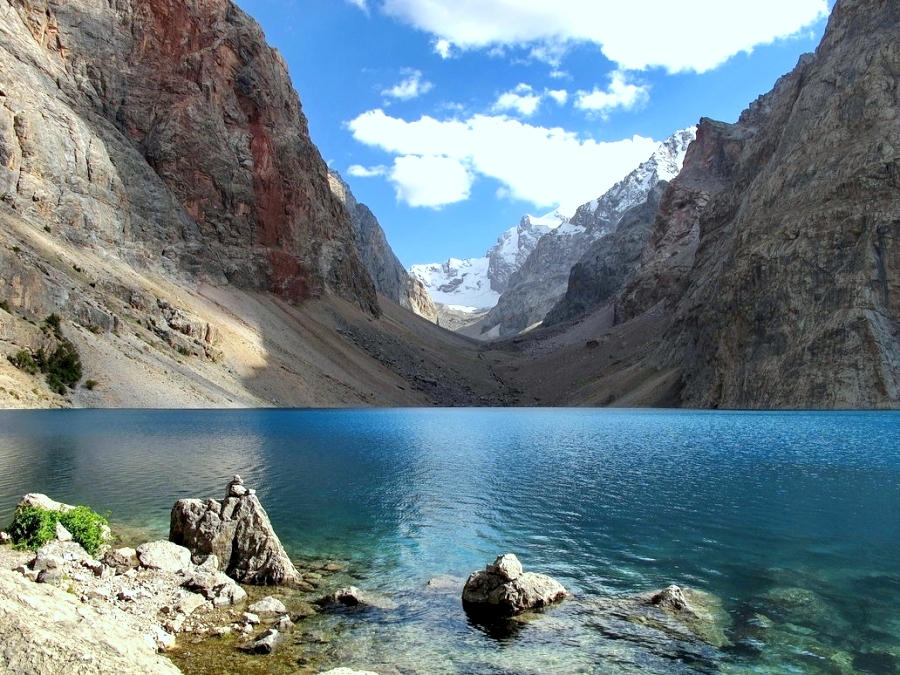 Kairakkum reservoir is called the Tajik sea. It is located east of Khujand, and formed as a result of the construction of hydropower plant on the river Syr Darya, which has become an excellent tourist destination. Sanatoria, resorts, and campgrounds located in the magnificent orchards have appeared on its banks. An intact unique ecology, landscape and natural sites have been preserved on the basis of the existing 13 state nature reserves and conservation areas "Zorkul", "Romit", "Mozkul", "Dashti Jum" and Tajik National Park. 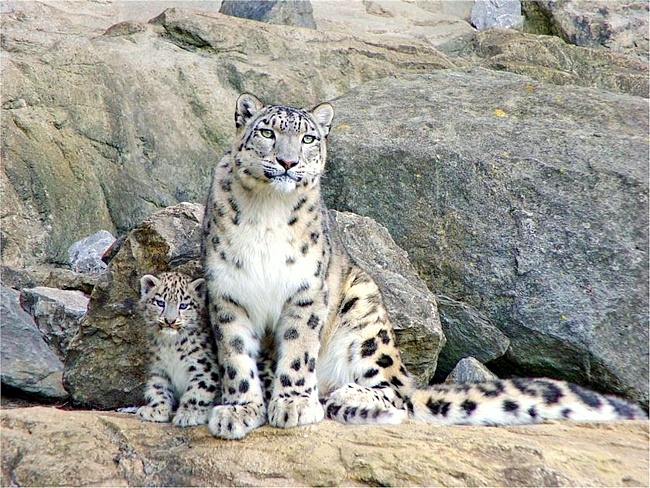 Rare endangered species of plants and animals listed in the Red Book, including screw-horned goat (morhur), mountain argali (Marco Polo), Bukhara mountain sheep (urea), spotted Bukhara deer, snow leopard, Tien Shan brown bear, striped hyena, Indian mountain goose are also preserved .
About 84 species of mammals, over 365 species of birds, 49 species of reptiles, about 52 species of fish and more than 10,000 species of insects inhabit the territory of the republic. Flora of Tajikistan has more than 5,000 species of higher plants, including many endemic species. The territory of Tajik National Park is 2.6 million hectares, which covers 18 percent of the country's territory and 60 percent of the Gorno-Badakhshan Autonomous Region of the country. In recent years, the Directorate of the National Park actively implemented measures to promote ecotourism infrastructure and improve environmental conditions in the alpine parts of the Pamir.
The country operates 125 objects of tourist and health resort destinations, including 51hotels and 9 sanatoria, recreational areas, tourist centers, health camps. Most hotels are located in Dushanbe, Khujand, Kurgan-Tube, Kulyab and Khorog.
Tajikistan has three international airports in Dushanbe, Khujand and Kulyab. Territory of the republic from west to east is crossed by 3 branches of railways that connect the central, northern and southern regions of the country through the territory of neighboring states of Turkmenistan and Uzbekistan.
Natural and recreational resources of the country, the presence of historical and cultural monuments predetermine formed features of the national tourism product. Promotion and implementation of it on the world markets of tourist services provides a stream of foreign tourists to Tajikistan.
In this regard, priority modes of international tourism in the country are considered: 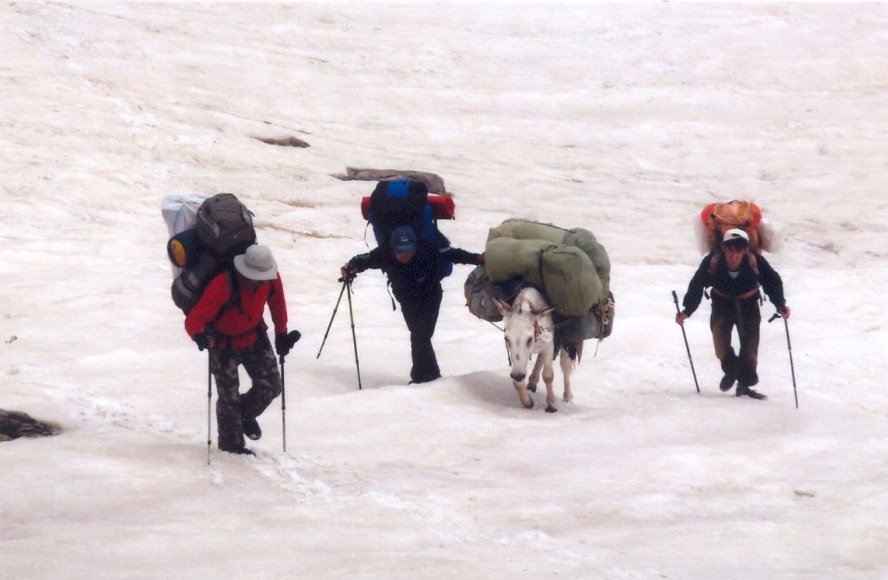 The majestic Pamir - one of the famous highlands of the globe with altitudes from 2800 to 7495 meters above sea level, known worldwide as the "roof of the world "is situated on the territory of Tajikistan. Here tourist resources include climbing routes on the highest peaks - Somoni and Eugene Korzhenevskaya located at an altitude of 7000 meters; hunting, natural landscapes, caves and thermal mineral springs and cold, carbonate and silicate waters. Every year Tajikistan hosts international climbing expeditions, during which the climbers from around the world ascent to the highest peaks of the country.  Climbers from all over the world are eager to conquer the peak Somoni (7.495 meters) which is Pole altitude of the Pamir. The unique topography of the region favors the development of hiking trails and trekking varying degrees of difficulty, employment of special sports such as climbing, hiking, skiing, mountaineering, combined with hunting and photo hunting, rafting, sky gliding, snowboarding, caving and other forms of extreme tourism. 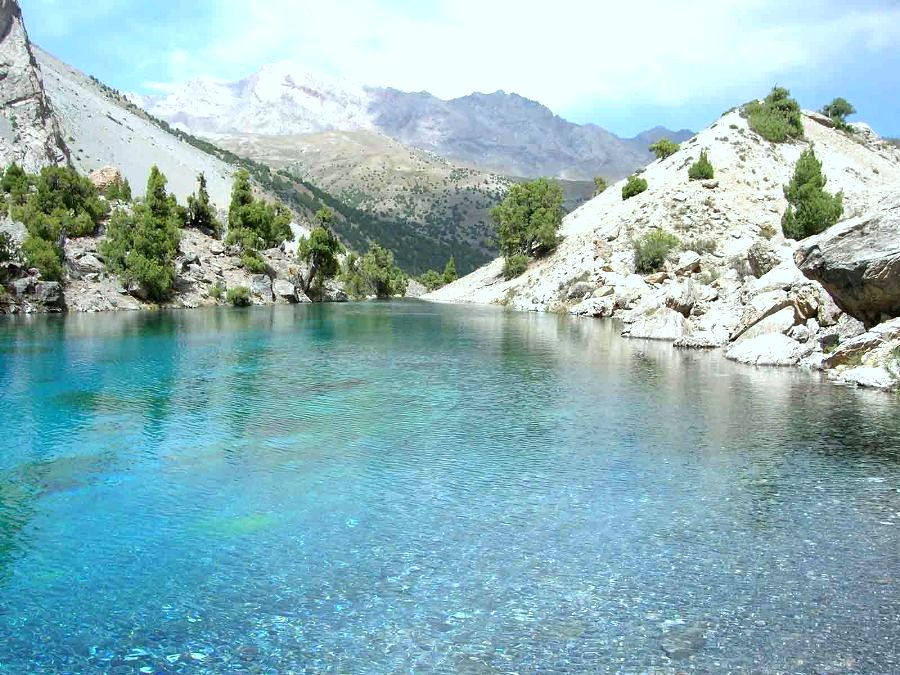 Tajikistan is the one of richest countries on the supply of fresh water resources. Almost half of the water resources of the Central Asian region are formed in the mountainous rivers, lakes and glaciers of the country.
The Republic of Tajikistan ranks eighth in the world on hydropower resources.
Especially Gorno-Badakhshan Autonomous Province of the Republic is very rich in lakes that have very different origins. The largest of them are Karakul, Zorkul, Rangkul, Shorkul, Bulunkul and Lake Sarez, which was formed by an earthquake in 1911. In general, 1450 lakes and 220 rivers, or 83% of the total surface area of lakes in Tajikistan are concentrated in the Pamir region at altitudes of 3,200 to 5,000 meters. The largest lake of the Pamir is a unique salty Karakul Lake located at an altitude of 3914 meters above sea level. Its greatest depth is 236 meters. It is believed that it was formed during the ice age; and the bottom of the lake, as well as some of its coast is covered by permafrost for many kilometers.
About 200 sources of mineral and thermal waters function in Tajikistan, on the basis of which spa tourism destinations are developing. The most famous of them are resort "Khoja Obi Garm," sanatorium "Shaambary", "Obi Garm", "Zumrad", "Havatag". In sanatoriums and resorts of Tajikistan services are available for the treatment of diseases of the cardiovascular system, respiratory system, musculoskeletal system, urinary system, gynecological diseases, gastrointestinal tract, liver and biliary tract, and skin diseases.
On hot carbonated spring resorts "Garmchashma", "Bashor" and "Shahdara" there formed travertine - limescale of sinter forms. They are especially beautiful at the source Garmchashma, located 35 km from Khorog. Source Garmchashma is located at an altitude of 2325m above sea level and visible from afar thanks to the exceptional white travertine. Travertine is long shaft, laced ledges down to the river. On the slopes it hangs like stalactites grown together, producing the impression of frozen cascades and stone bowls. Natural bath with water of different temperatures (up to 62° C) form on ledges.
Man-made unique natural monument in the Pamir, Pamir Botanical Garden is located at an altitude of 2320m above sea level in the vicinity of Khorog. This garden on the background of barren slopes is a true wonder of the green, which collected more than 20 thousand plants from all over the world. Among them are such rare and unusual specimens of plants, as Amur cork, cork, Austrian black pine and a unique collection of roses with pure tones and incomparable flavor.

Especially popular among tourists and climbers are the Fan Mountains, which are located between the Zarafshan and Hissar ranges from Kshtutdari to Fandarya. Today the Fan Mountains are the most accessible of the highest mountains of the country for tourists. In the stone forest thicket of these mountains housed mirror blue-green water - Lake Iskanderkul, the largest lake in the Fan Mountains, located in northern Tajikistan. It is widely spread over an altitude of 2200 meters. Here tourists can observe the flickering stars and the mist rising from the lake surface. On the shore of the lake 160 km from Dushanbe is located hostel "Iskander". Tourists make this way on vehicles at amazing canyons of Fandarya, Yagnob and Iskander. The mountains around seem multicolored since they are dominated by bluish, red and purple hues. Iskandardari canyon is sometimes called the canyon of colored rocks, and the forces of wind turned them into fancy walls and castles.  Avid travelers can expect a lot of interesting things in the south of Tajikistan as well. One of the oldest cities of Central Asia, Kulyab in 2006 celebrated its 2700th anniversary, which has become a landmark event for the country. In loess strata near Baljuvon region Tajik archaeologists have unearthed stone tools, the oldest ever found in Central Asia - their age is 850,000 years. There are also discovered unique Neanderthal sites in the area near the cave Danghara Ogizkichik with furnaces around which 15 thousand charred shells of turtles were found.

Of great interest for foreign tourists are attractions of the beautiful surroundings of the ancient city of Hutal, now called Kulob. Mountain Hajja Moumin is especially attractive. It is a unique natural monument, which consists entirely of pure salt of different colors, yellow and gray, bluish green and pink. Salt reserves of this mountain can provide all humanity for hundreds of years.Another miracle of Hajja Moumin is its caves, which are renowned for their musicality. It turns out that the wind generates wonderful sounds. Wind touches like keys, long and thin glass icicles-stalactites hanging at the entrance to the cave. Unique historical and architectural monument is the mausoleum of outstanding thinker and religious leader of the IV century Mir Said Ali Hamadoni in Kulyab. Many followers who revere his Sufi teachings make religious pilgrimages here. The climate is subtropical with significant daily and seasonal fluctuations in air temperature, low rainfall, dry air and low cloudiness. The average January temperature ranges from + 2 to -2 °C in the valleys and foothills of the south-west and the north of the republic; in the Pamir it falls below -20 °C. The absolute minimum temperature reaches -63° C in the Pamir (Bulunkul). The average July temperature is from 30 °C in the lower valleys of the south-west to 0 °C and below in the Pamir. The absolute maximum temperature is 48 ° C (Lower Pyanj). In rare cases, the temperature reaches 60 ° C.
REFERENCE
State structure of Tajikistan
Tajikistan is presidential republic. Legislative power is exercised by the Parliament - Majlisi Oli. Currency - somoni.

Economy of Tajikistan
Tajikistan is an industrial-agrarian state that has a considerable tourist and economic potential. Long war, the associated with it destruction and numerous victims among population led to a sharp decline in the economy. But in the last years of peace economy and living standards have risen significantly. Export of aluminum provides half of export earnings. The export of cotton takes the second place.
The country has significant potential for hydropower. The total volume of hydropower is estimated at 527 billion. This makes the state one of the most secured by this renewable source of energy in the world (the eighth place in the absolute potential output).

Religion
The vast majority of the population of Tajikistan (95-99%) is Muslim-Sunni of Hanafi madhhab (which was formalized from April 2, 2009).

Language
The official language of the Republic of Tajikistan is Tajik. Russian is the language of interethnic communication.

Customs
Amounts in excess of 500USD or its equivalent in another currency must be declared on arrival. The maximum amount permitted to be imported is 5,000 USD. Import and export of local currency is prohibited. Likewise banned are drugs, weapons, ammunition, explosives and poisons, pornography and any printed materials, photos and videos that contradict the Islamic morality. Precious metals and stones can be taken only if there is a document confirming their purchase in a store of Tajikistan.

Dear Anastasiya, I want to thank you, in behalf of my sister and I, for organizing the tour for us. We enjoyed it very much. You, the guides and the drivers, ...